Community Atlas is an open platform where collected data are directly accessible to relevant stakeholders involved in community development and urban upgrading. Consisting mainly of demographic reports, Community Atlas is based on official datasets, including original StatsSA Census data. Where possible, it is updated using current and localised studies which have been indexed and referenced to their open data sources. This open data platform is designed for multiple users, such as community stakeholders, government officials, NGOs and other interested parties. 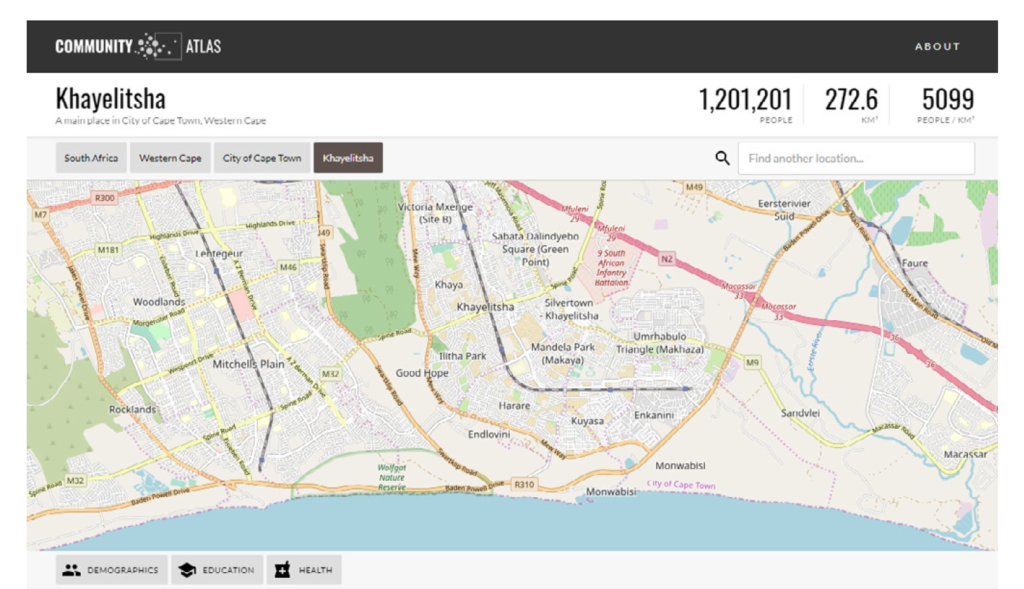 As a web-based data platform, Community Atlas enables users to zoom into areas or settlements of interest, defined by an administrative region for which official and current data have been aggregated into a series of printable reports.

Users can further focus or contextualise their own area of interest by zooming in or out, accessing data across administrative frameworks at various scales. Advocating for an evidence-driven approach, this open platform fosters better service delivery and people-centred participatory planning.

This open data platform enables stakeholders to gain a deeper understanding of communities and their needs and to actively partake in evidence-based and people-centred community development.

The Community Atlas was developed by Violence Prevention through Urban Upgrading (VPUU) in partnership with OpenUp with funding generously made available from Comic Relief and was built on Wazimap, which is based on the amazing Census Reporter and is entirely open source.

If you would like to contribute data or get involved in other ways, please drop us a message at communityatlas@openup.org.za.

Manage Cookie Consent
To provide the best experiences, we use technologies like cookies to store and/or access device information. Consenting to these technologies will allow us to process data such as browsing behavior or unique IDs on this site. Not consenting or withdrawing consent, may adversely affect certain features and functions.
Manage options Manage services Manage vendors Read more about these purposes
View preferences
{title} {title} {title}